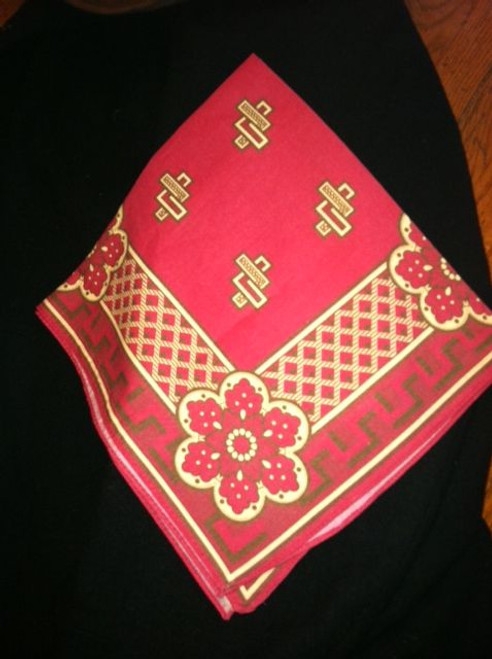 This handkerchief marched to the sea with Sherman and smelled of woodsmoke and gunpowder....now you can own this great piece of American Civil War material culture history!

Currently in the collection of the Oshkosh Public Museum.  We were given permission by the museum to reproduce this handkerchief and a portion of the proceeds from its sale will be returned to the museum.  This handkerchief was used by Joseph Arnold, 1st Wisconsin Infantry and later 26th Wisconsin Infantry.  In a letter dated August 27, 1864 he writes: "Dear Mother:  Your most welcome letter, together with suspenders, handkerchief, and thread, I have received and was happy to learn that you all were still enjoying good health."  This is possibly the handkerchief he refers to!  Joseph Arnold was the son of Frederick and Margaret (Mack) Arnold, both from Bavaria, Frederick came to America in 1835 and married Margaret several years later, 1843 family moved to Milwaukee, WI, and in 1851 to Oshkosh.  Frederick was employed as a soap and candle maker in 1857.  Joseph was employed as a butcher according to the 1860 census.  Joseph went to Milwaukee in April 1861 and enlisted in Company H, 1st Wisconsin Infantry (Three Months Regiment).  He served in Virginia and saw action at the Battle of Falling Waters.  He mustered out of service on August 15, 1861.  Joseph reenlisted in Fond du Lac on August 15, 1862, as a sergeant in Company E, 26th Wisconsin Infantry (Seigel Regiment).  He fought in the battles of Chancellorsville and Gettysburg (where he was captured on July 1, 1863) and was a prisoner of war at Belle Isle near Richmond, Virginia until March 7, 1864.  He participated in the Atlanta Campaign, March to the Sea, and the March Through the Carolinas.  He was promoted to 1st Lieutenant on February 11, 1865 and commanded the company as senior officer and briefly commanded Company H.  He mustered out on June 13, 1865. After the war he operated a restaurant and bottled mineral water in Oshkosh. He married Matilda Moss on November 24, 1868 and raised four daughters.  Arnold was active in the Grand Army of the Republic and was commander of the Phillip H. Sheridan Post #10 in Oshkosh.  He died in 1898.

After recently seeing this reproduction, Archivist Scott Cross stated the following: "The red color of the (original)handkerchief has really faded over 150 years. The red that our graphic artist came up with was his estimate of the original color and "color corrected". The yellow in the reproduction is very close to the original, which does not show much color loss. What visually throws things off is the color restoration of the brown in the reproduction. The brown in the original has faded so badly that I did not even notice that it was there until the artist pointed it out to me. He then scanned the handkerchief and enhanced the image and you could really see this pattern then. It was amazing. The reproduction of the brown is what it would have looked like when new. In my opinion this reproduction captures the original appearance of the Joseph Arnold handkerchief in 1863 with the vibrant colors restored. This is a flawless reproduction."  Further comments were "I went into the collections storage and laid the prototype next to the original.  It is absolutely "spot on" correct.  The weight is perfect."

As is the original, this reproduction is a heavier cotton cloth than our "Galloway" Handkerchief and is faithful to the original in every detail.  Size is 21x19, which is the size of the original.